Agnès watches over the Wind Crystal, one of the four crystals worshiped by faithful of Crystal Orthodoxy. When a dark power overruns her temple and the world, she sets off on a quest to awaken the crystals.

Of the Oblige line, she met Airy on a hill above the chasm. She encountered Tiz as foretold after he miraculously escaped death.

A twenty-year-old girl from Ancheim. As a vestal, she has devoted her life to the crystals. She escaped the Temple of Wind after it was overrun by dark forces, and came to investigate the Great Chasm. She has absolutely no sense of direction.

In Bravely Default, Agnès has brown eyes and long brown hair down to just above her knees, kept in place with a black hairband. She wears a knee-length white dress with dark sleeves and black fur trimming at the hem and black embroidery at the bust. She wears a black bolero, a black cinch belt, knee-high black boots with pom-poms and elbow-length black gloves. She has a blue pendant, given to her by the Sage when she was a child. While purifying a crystal, Agnès dons the Vestal Garb which consists of a short white dress with decorative patterns. Her sleeves wrap around her upper arms. She wears black gloves and brown boots. While using the asterisks, Agnès's appearance changes according to which job she is currently using.

In Bravely Second, Agnès retains her long brown hair, now wearing a white hairband to keep it in place. She is outfitted in a formal white dress, somewhat reminiscent of her vestal garb, that is emblazoned with varying paraphernalia meant to signify her position as Pope. She wears black gloves and white thigh-high boots. She retains her blue pendant which is now slightly broken.

In her Knight's Tunic outfit, she wears white corset-like one piece outfit with a black center and gold accents. Her "shorts" are black with red and gold stripes. She has a red sash across her right shoulder and black fingerless gloves with a black pom-pom on each hand. She wears silver high-heels with black legwarmers and a red ribbon tied around her ankles and armor knee braces. Her headband is silver with a black bow. The Plain Tunic is her Freelancer outfit. Her Bravo Bunny outfit is a skimpy white one piece teddy with fur lining around each leg. She has black gloves with a white bow on the side and black thigh-high boots with a white bow on the back of each. She wears a white rabbit ear headband with black marking on the tips. In the Japanese version, there is a large cutout in the center of the teddy.

Agnès is a polite, motherly young woman; she is slow to open up to others, though once she does is a kind, if reticent, person. She generally does not participate in the group's more casual conversations and can be blunt or aloof when the need arises. She is intent on her role as a vestal and is not originally keen on letting others accompany her on the notion that bringing light to the crystals is her sole mission; she does not want other people to be burden to her or be burdened with her problems.

Agnès is quiet, reserved, does not show her emotions or worries readily, and has trouble admitting them to herself. She holds people at a distance and mistrusts others, for some time even her own allies Edea and Ringabel. She seems to hold Tiz in much higher esteem, and is also very protective of him. She worries that the townsfolk see her as a mere object to enact her duty as vestal rather than as a human being, and though she is composed on the exterior, admits to being terrified of others.

While she chastises Edea for her rash behavior, Agnès's biggest flaws are in her naivete and shortsightedness. Agnès does not seem to value her own life, often playing the role of martyr for the sake of others and committing unpleasant acts, feeling that it is her duty. A good example of this naivete and lack of world experience is her confusion regarding what a bow is, how to utilize one or her dismal sense of direction.

At first, Agnès is socially inept, practical, and has difficulty communicating with others due to her extremely sheltered upbringing, which she longs to return to. She also struggles to be the leader her companions need her to be, though in the end comes to prove herself to both her companions and the whole of Luxendarc. While normally the most level-headed and pragmatic of the group, she is not above anger or rage, to the surprise of others.

Upon learning of the Crystal Orthodoxy's history and wrongdoings, she becomes confused about her goals and allegiances, and comes to resent her own loyalties due to the part they have played in allowing her to be manipulated by Airy, for which she desperately seeks to atone. This confusion seems to have stuck, as having completed her tasks as the Pope of the Crystal Orthodoxy, she ultimately relinquishes the title, albeit now an infinitely more mature and wiser woman.

When the Wind Crystal is consumed by darkness, forced to watch her acolytes sacrifice themselves to protect her, Agnès embarks on a quest on the advice of Eloch Quentis Khamer VIII to see the condition of the world. She sets out on a merchant vessel towards Caldisla that becomes waylaid half-way by the sea's sudden deterioration. After being rescued by boats from Caldisla, Agnès investigates the effects of the earthquake that struck shortly after she left Ancheim.

While pursued by the Knights of the Eternian Sky, Agnès encounters Tiz Arrior when she arrives to the site of the Great Chasm. Agnès refuses Tiz's help, as she believes facing adversity on her own is part of her responsibility as vestal of the Wind Crystal. When confronted by white mage Holly Whyte to surrender, she initially agrees. Agnès learns that even though she could give herself up, it would not help anyone else. Agnès distrusts Edea when she joins the party, and learns of her full connection with the Eternian forces. She becomes furious to learn Edea is the daughter of the council's leader, Braev Lee, after the death of her fellow vestal and friend Olivia Oblige at the hands of Victoria F. Stein.

After restoring the crystals and bringing Airy to the Pillar of Light, Agnès finds herself in another world and meets the Sage Yulyana of the second world who asks her to bring her most trusted companion to meet him in private. Choosing Tiz, Agnès learns of the Sage's past as a former high-ranking member of the Crystal Orthodoxy and how he and Lord DeRosso forged their alliance when an "angel" resembling Agnès appeared before them. Sage relays the angel's words of great evil and the nature of the crystals in relation to the "Harrowing" and the wind vestal's journey. Encountering other denizens of the second world, Agnès learns the dark secrets of the Crystal Orthodoxy, which were the motivation for the Anticrystalist movement.

After they end up in another world, Ringabel suggests consulting the sage again as he knows the events of the previous world would happen again, including the time Tiz and Agnès spoke to the Sage alone. During the second trip alone with Tiz, Agnès learns that Airy is evil and has been manipulating them. When Tiz inquires further into the story of the angel, it is revealed her death was caused by Airy's treachery. Though her other selves were unable see the truth until it was too late, Agnès's faith in Tiz allows her to accept the truth of Airy. This leads to Agnès to being more distant towards Airy, yet she continues summoning the Holy Pillar in the hope that each time would be the last.

After the last time Agnès learns that Airy serves Ouroboros and that she orchestrated her master's plan to consume the realities. With the pendant in her possession, Agnès gives her group the advantage and they destroy Ouroboros. After returning to her world, Agnès rebuilds the temple of the wind and enlists new acolytes to assist her in restoring the crystals and overseeing them.

After learning the truth of her faith's corruption, Agnès becomes the newly inaugurated Pope of the Crystal Orthodoxy and purges it of its corruption while forming relations with Eternia. During the peace signing between the Orthodoxy and the Duchy of Eternia, Agnès is kidnapped by Kaiser Oblivion and held captive in the Glanz Empire's sky fortress. After being rescued, Agnès aids Tiz and the others by communicating through a fragment of her crystal pendant in the possession of her Orthodoxy knight Yew Geneolgia.

After the battle with Providence, Tiz begins to die without Altair's soul to help keep him alive. Deneb, friend of Altair and Vega, and an Adventurer, asks the party to give her the SP Hourglass, which she takes into the past and delivers it to Tiz at the beginning of the events of Bravely Default. Filled with two years worth of SP, Agnès reveals that she has held the hourglass since Tiz's coma. Agnès rushes to the Norende Ravine and uses the SP Hourglass to give him a new chance of life. In the aftermath, having succeeded in establishing peace between the Orthodoxy and the Duchy, Agnès resigns from her position with the intention to marry Tiz and settle in Norende.

Agnès has the highest MP, Intelligence, and Mind, though she lacks in physical stats like strength and agility compared to the others, similarly to Tiz she also starts at level 1. This makes Agnès stats useful for magic-oriented jobs such as the Black Mage or White Mage. The player can also opt to compensate for her lower physical stats with jobs such as the Red Mage, Thief, or Dark Knight. The Vampire job is also recommended to her due to its high HP and balanced stats, the player should keep in mind however that base stats don't ultimately determine a character's competence on a particular job, and that any of the party members can do any job without major drawbacks due to stat differences. 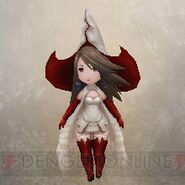 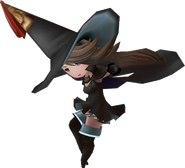 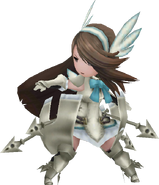 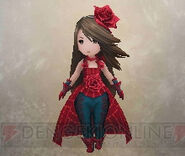 Agnès is voiced by Ami Koshimizu in the Japanese version. She shares her Japanese voice actress with Queen from Final Fantasy Type-0.

She is voiced by Erin Fitzgerald in the English version. She shares her voice actress with Nanamo Ul Namo from Final Fantasy XIV.

Agnès's theme is "Where the Wind Blows", the theme played during her "Special Move" sequence.

Agnès has appeared in the following games throughout the Final Fantasy series:

Agnès has made guest appearances in the following non-Final Fantasy games:

Agnès in her Pope outfit from Bravely Second, known as the "VW type Agnès Oblige", is available for MikuMikuDance, however the permission to use the files is exclusive to Japan.[1][2]

Community content is available under CC-BY-SA unless otherwise noted.
Advertisement