Image needed
This article or its infobox is missing one or more images. You can help the Bravely Default Wiki by uploading one. 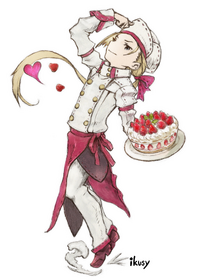 Angelo appears as a polite, and dedicated patissier, treating his customers kindly and respectfully. In truth, he hides a much darker side, growing arrogant as a result of his high popularity with women due to his good looks and delicious food to the point he feigns interest, but is in fact indifferent.

While he feigns being kind and attentive to Aimee Matchlock, he saw her as little more than a tool. He even goes as far as declare that he was annoyed that a "spatula" like her was broken, and that he had to dirty his hands personally due to her failing her mission. He also was sick of being called "darling", stating he hated the "clingy" types the most.

However, as he continues to elaborate, he is visibly more shaken and angered at the thought of losing her, revealing that he genuinely loved her. Near the end of the game, he is openly in love with Aimee and the two are a couple, deciding to stop fighting as her encouragement drives him to become a more dedicated cook instead.

Having been deployed to Eisenberg alongside Aimee, first seen talking to her during her attempt to snipe Yew Geneolgia despite the great distance between the two land masses, Angelo poses as a traveling confectioner who comes to Hartschild during its festival to sell his heavenly-inducing Ghostly Ganache pastries to the people. Through Angelo nearly got Yew's group that way, he is forced to give them to women who had been admiring him. Once the deed is done, Angelo proceeds to Yunohana to give a new batch of Ghostly Ganaches to Lord Arima. But after Yew chooses who among his group eats first, Angelo reveals himself after that member vanishes. He then calls his Imperial Guardslady fans to aid him in fighting the party, only to be defeated.

Distraught of being defeated like Aimee, who he admitted to had a dislike for, he attempts to take his own life by eating a Ghostly Ganache. But he stopped by Aimee from beyond the grave as a heartfelt message she left him convinces the man to left the fight and open a pancake shop. He at first becomes irritated, but leaves to honor her dying wish.

When Yew and his group use the SP Hourglass to go back in time to stop the kaiser before he could kidnap Agnès, Angelo believed his memories of his previous timeline as a strange dream as he and Aimee open his shop in the Florem Gardens. But encountering Yew's group, Angelo proceeds to fight them as he promised himself a rematch against them. But the fight ruined Angelo's business with Yew offering to help him and Aimee set up a new shop on Gathelatio.

Angelo is fought as a boss utilizing his skills as a Patissier, weakening the party's stats with his cakes. He will continually debuff the party's P.Def and M.Def.

In the first battle, one of the protagonists will begin the fight in Ghost status, making them only able to use magic to contribute to the fight.

In the second battle, he fights alongside Aimee and will debuff the entire party at once with Items for All. His main strategy is to cause the party to become weak to Fire-element attacks, which Aimee will exploit with her elementally-charged attacks. Angelo will also use a cake to inflict Ghost status on a party member.

Angelo appears as an obtainable unit.

Add a photo to this gallery

Angelo appears on a sticker set for the LINE communications app. The sticker set he appears in is titled "Bravely Stickers - Volume 2".[1] 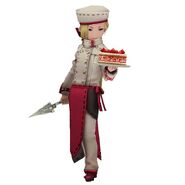 Angelo's bestiary entry in Bravely Second.
Add a photo to this gallery

Angelo's middle names, "Oscar Vincenzo Olivier", are shortened to the acronym "OVO", which means "egg" in certain Latin-based languages, such as Spanish and Portuguese.