Bella is a non-player character in Bravely Second: End Layer. She is the Wizard asterisk holder who loyally serves the Glanz Empire under the title of Dark Vestal. She finds herself in a bizarre relationship with Cú Chulainn.

Bella is a twenty-two year old woman with long black hair, red eyes and purple lipstick. She wears a short dress and a long black cloak with a white decorative pattern on the hem and covers her eyes with its hood. She wears black tights and knee-high boots. She carries a small blonde-haired doll dressed in a red cloak with the hood up. It has a white shirt under the cloak and long pink ribbon tied around its neck. It has red shoes and red tights.

Bella is considered odd and creepy. She carries around a strange doll, named Donna, and enjoys toying and scaring her victims. She cares for Cú Chulainn as her companion and can be easily embarrassed, such as when Cú incorrectly states that her greatest talent is ventriloquism. If Cú Chulainn is defeated first in battle, Bella will fly into a rage and try to avenge him while laughing manically.

A few years before the Duchy of Eternia was established, the Crystal Orthodoxy killed Bella's parents and sister Donna on the charge of witchcraft, blaming them for causing the Great Plague. Ever since Bella has hated the Geneolgia family and made failed attempts to resurrect her sister, only ending up conjuring monsters instead. Her only success was resurrecting Cú Chulainn from a statue in the possession of Yew Geneolgia's father, though she accidentally turned him into a centaur. Regardless, Bella came to care for him.

Kaiser Oblivion tasks Bella to kill Yew Geneolgia, and she torments him after he returns to Pilgrim's Grove with images of dead Crystalguards and her doll, whom she has named after her late sister. Bella is about to land the deathblow when deterred by Edea Lee, losing her asterisk to them as she is forced to escape. Upon returning to Skyhold, Bella is to be executed for her failure until the Kaiser, touched by Cú Chulainn, gives her one last chance by sending her and her servant to intercept the group at Frozen Hollows.

When Yew and his group use the SP Hourglass to go back in time to stop the Kaiser before he can kidnap Agnès Oblige, it negates Bella's demise with her appearing to gain memories of her previous timeline as consequence. Revealing her story to Yew, Bella and Cú Chulainn offer themselves to cover the unmasked Denys Geneolgia's escape to the Skyhold. This time, Yew spares Bella's life and asks that she is taken to see Agnès so that the cycle of death and hatred does not continue. Although Bella and Cú Chulainn are asked to remove their weapons, Agnès allows her to keep her doll out of respect.

Bella wields a mysterious doll in battle and is fought three times. As the wielder of the Wizard asterisk, she uses dangerous magic. Spirit Magic allows her to deal moderate damage of various elements to the whole party, and Spellcraft further enhances these spells.

Bella frequently covers herself and her allies with Wall Spellcraft, causing any physical attacks on the target to trigger a damaging magic counter. When on the offensive, Bella can also use the Dart Spellcraft to make her spell deal heavy damage to a single target, or place Mist Spellcraft on the entire party, recasting her Spirit Magic every turn for periodic damage. In her final battle she will also use Rain, causing multiple hits of heavy spell damage to random party members.

Bella is voiced by Akiko Yajima in the Japanese version. She shares her voice actress with Chobi and Earl Tyrant from Final Fantasy: Unlimited.

Bella appears on a sticker set for the LINE communications app. The sticker set she appears in is titled "Bravely Stickers - Volume 1".[1] 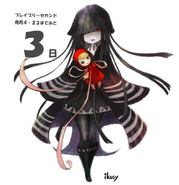 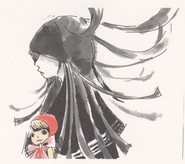 Bella appears in front of a scared Yew.

Bestiary entry.
Add a photo to this gallery

In the Japanese version, Bella's sister is left unnamed. Her doll is also unnamed, but her attachment to it, as a stand-in for her sister, is indicated by her referring to it as a real child.

In the English version, Bella's sister is named Donna, deriving from Belladonna, also known as the deadly nightshade. This name is also given to Bella's doll, which is called "Donna the Doll."

Template:Etym It may also come from the verb meaning "to wound" or "to murder" (危める or 殺める, ayameru?), alluding to her nature in battle.