Start a Wiki
Article incomplete
This article is incomplete. You can help the Bravely Default Wiki by expanding it.

Bravely Default: Praying Brage was a free-to-play web browser game in the Bravely series that started its open beta phase on November 1, 2012. The game is set 200 years after the events of Bravely Default. The game has ended its service as of April 24, 2019.

The game employs a job system similar to Bravely Default. The player begins by pledging allegiance to one of the four Crystal Maidens.

Beyond the returning jobs from Bravely Default, the game adds the Warrior and Gunner. Jobs are obtained by redeeming asterisks received from quests and events.

Set two hundred years after the catastrophe that occurred in Bravely Default, the ocean to the south of Luxendarc was evaporated by the Holy Pillar caused by "the one who brings about apocalypse" (終焉を招く者, Shūen wo maneku mono?). The four Crystals, as well as their temples, were shattered and scattered throughout the Luxendarc in the form of thick thunder clouds which blocked out the sun leading to the "decade of blackening rains and roaring thunder" (黒雨と轟雷の十年, Kuroame to gōrai no Jūnen?). Those who survived abandoned the flatlands.

In the present, the world continues to decay. The lands continue separating from the surface slowly rising into the skies and disintegrating in the upper atmosphere. First it had been the cliffs to the west of Florem, then the northern part of Eisenberg. Over the next hundred years four plains, eight highlands, three oceans and two continents floated into the skies and disintegrated.

Fifty years prior to the game, an organization proclaiming to be of the Crystal Orthodoxy, landed on the rising continent. They gathered the crystal fragments and buried a crystal piece (クリスタル塊, Kurisutarukai?) they had crystallized with the power of prayer within the continent. The continent ceased to rise, coming to a halt above the thunderclouds covering the lands. This place became known as Crystalica (クリスタリカ, Kurisutarika?). The organization traveled by airship to the high lands where people had gathered and brought them to Crystalica, saving them from Luxendarc's end.

Crystalica gave birth to a society revolving around the Crystal Faith. A method for artificially producing crystal, "the law of the crystal" (造晶の法, Zōshō no Hō?) was created and the decline of the crystal power within Crystalica was prevented. The invention of the Anchor Obelisk (アンカーオベリスク, Ankā Oberisuku?) allowed for the efficient collection of crystal fragments from rising continents and the religious organization buried a crystal piece within four other floating continents and appointed four vestals to govern them.

The soundtracks from Bravely Default are used.

The game is developed by NHN Game, the developer behind Piccoto Knights for the PlayStation Vita. The first trailer was released on October 24, 2012.

With regards to connectivity with Bravely Default, participating in the open beta for Praying Brage unlocked a prayer costume for Edea Lee in Bravely Default. 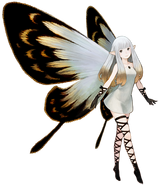 Roanne Crystallia (Unhooded).
Add a photo to this gallery